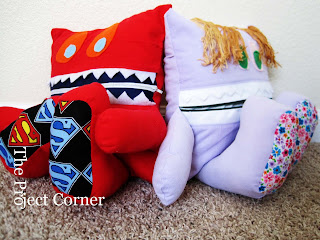 I found this pattern a few weeks ago and stitched up some monsters for my kiddos. 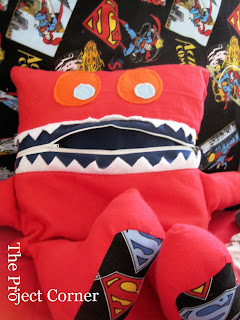 I changed the foot pattern a bit.  The pattern is just a big square, I shaped it so it had a leg and a foot.  Other than that I followed the pattern. 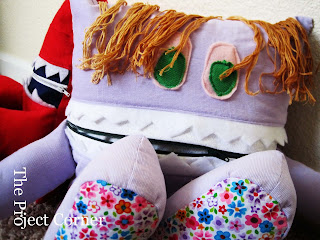 They monsters haven't been named yet, but this chick has quite the hair style.  I used several different shades of DMC floss and wrapped it around an envelope, cut it in half place it on the material and stitched it in place. 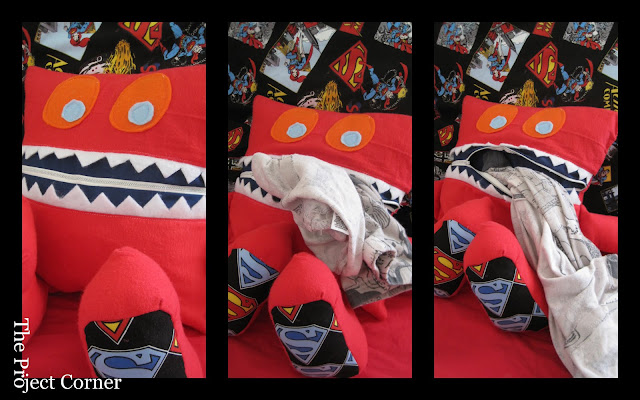 Yum! Jammies!
My kiddos are excited to put their jammies away each morning and to open the monster up to find their jammies each night.

This is a Sponsored post written by me on behalf of Express. All opinions are 100% mine.

When I was a working girl I remember taking a leadership class.  I mostly took it to get away from my desk, but there was one thing I remember from the class: if you want to be successful you need to dress successful.  You will act differently and others will treat you differently.

Too bad that statement didn't come with a wardrobe salary, but I did notice that when I dressed up a little more for work I was treated with respect-people didn't question what I was saying and I felt more polished and ready for the job.  So where do you go to get great clothes? Express of course.

Did you know that Express has suits?  Yes, women's suits

Seriously, well designed, great fabric choices (stretch, lightweight & modern), and a good selection of colors-who wouldn't love the suits?  Everything about the suits screams I am a confident woman and I am successful!

Now for the good stuff, you don't need to be a working woman to want to wear a suit.  In fact a suit would be a good thing to have in your wardrobe for a night out or a lunch with friends.  Express is giving you a chance to win a $500 suiting makeover.

Imagine having a great suit-maybe it's the thing you need to help you take the next step in your life.

Check out the suits and tell me what you would wear your new suit for?

The end of Summer and September around here are so full activities.  It begins with an old car show, then a rib cook off and last weekend was the Hot Air Balloon Races, then followed up by the Air Races.  Each is so fun to take kids to and enjoy family time.
We decided to go to the balloon races again this year.  We might be crazy, we woke up at 3:30 and left our house by 3:45 just so we could see this... 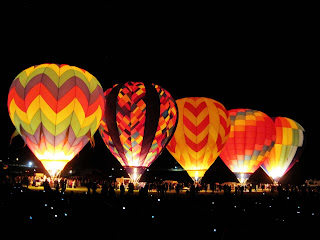 It is awesome to be surrounded by thousands in the dark and have the balloons glow all at the same time.
They have special permission and licenses to be flying in the dark. 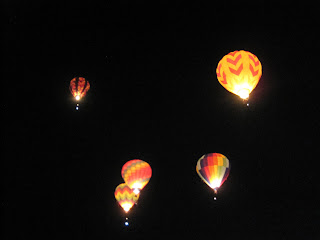 As we watched the balloons I couldn't help but think of quilt tops.  Wouldn't these be so fun to stitch up?  The colors are all brilliant and simple.
After the dawn patrol and the glow show we were blessed with a beautiful sunrise. 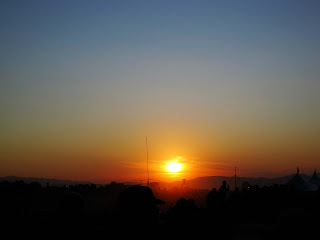 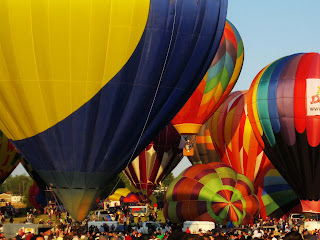 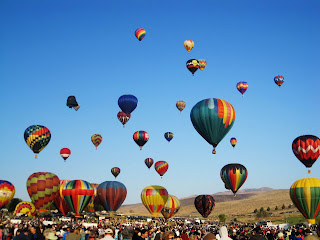 Within minutes balloons are scattered across the sky.  I'm saving my pennies so I can stitch up a quilt or two that look just like the balloons.  My hubby even suggested sewing a quilt with balloons on it-it would be fun to try it out for sure.
We were back home and ready for a nap by 9.  It was a great event and always worth the extra effort at the early hour.

On a different note...

Last Friday we heard a lots of sirens around town and couldn't figure out what was going on.  Our hearts dropped when we found out about the deadly crash at the air races.  I know several people that were in attendance when the crash happened, they are all safe.  One man who is a retired fireman said that it was the worst thing he has ever seen.  After an event like that it makes you give your loved ones an extra squeeze.  Hope you all are doing well.
No comments: Links
Email ThisBlogThis!Share to TwitterShare to FacebookShare to Pinterest

This is a Sponsored post written by me on behalf of Express. All opinions are 100% mine.

Do you subscribe to the no white after Labor Day rule?  I kind of do, it depends on the weather.  If it is still in the 90's come the second and third week of September I'm going to be wearing white pants or white shoes.  But if it drops into fall quickly I put away the white and start pulling out the fall colors.  Did you know that colored jeans are the trend right now?  Yes, they have white-but for those who aren't into white right now they have grey too...

With grey being the trend color too I'm sure some of you could match the decor of your home-and do it in style.

I've mentioned before how much I like Express jeans -guess what?  Their offering another giveaway!

From boot cut to flare jeans and even the ever so popular jean leggings, Express has the denim essentials you need! For a limited time, enter for a chance to win free jeans!

Express will be giving away 50 free pairs that you could possibly be rockin’ on the sidewalk! I myself am a traditional girl and go for the flare jeans.  I love the length of the legs-for I am a long legged girl and always want the look of longer legs too.

So check out the women's jeans and make sure you enter for a chance to win free jeans!  Tell me if you could pull of colored jeans, what would you wear? 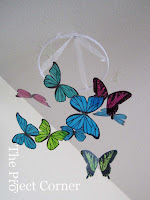 My hubby and his dad and brother are avid butterfly and bug collectors.  When I saw this butterfly mobile made out of milkjugs I knew it was my next project. 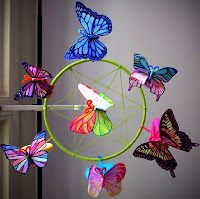 I didn't have a full range of colored permanent markers-each butterfly is monocromatic. 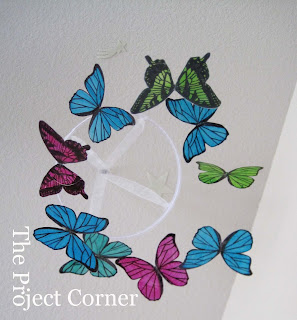 The hoop is an embroidery hoop covered in silk ribbon. 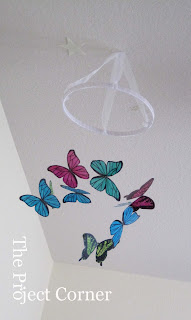 I used a clear thin thread to tie them to the hoop.  It took some practice to balance the butterflies just right.  It is amazing how the move in the air.  I might just take them off the hoop and hang them from the ceiling so they look like they are flying in the room, but for now it stays like this. 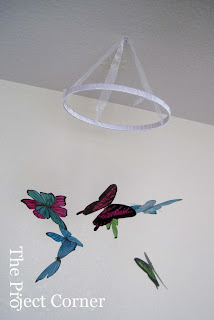 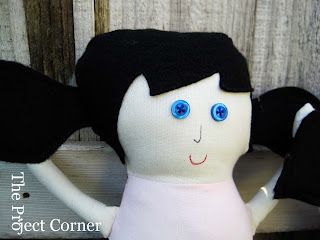 I added pigtails and used buttons for the eyes.  My little helpers helped me choose the colors and size of the buttons.  It doesn't show up much in this picture, but we added blush to the cheeks too.  I used a pink marker to draw on the smile and a black marker for the nose. 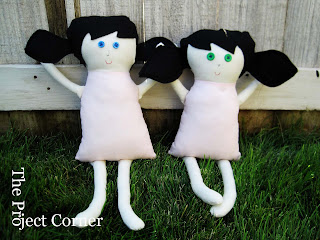 After making one, it needed a friend.  We are going to give the other one to my little girl's BFF. 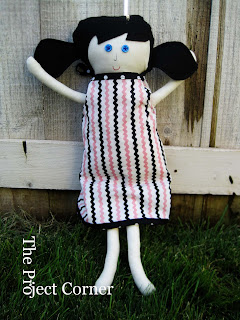 Every doll needs a dress too.  I may or may not have started several other outfits--the design is bothering me, hopefully I will have a pattern to share with you soon. 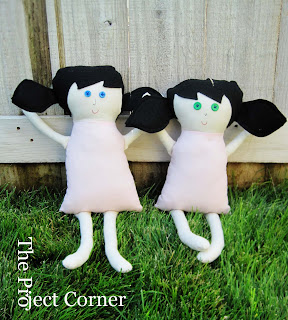 Don't these two dolls just look helpless?  They need someone big and strong to help ward off any villains or bad guys.
Is that a plane or a bird?... 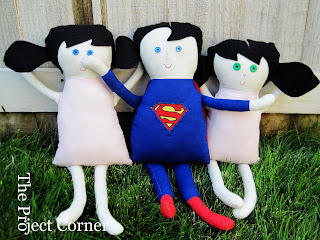 There is a coolness in the breeze now-always a sign that autumn is around the corner.  Our September is planned to the fullest.  Every weekend we have several events lined up for each Saturday.  I am in charge of teaching sharing time and writing the annual primary program.  It's going to be a busy fast month.  In my last post I showed you the Birthday wall art.  Now that the birthday is over I wanted to put in something that was a little more fall-ish. I didn't want it for Halloween or Thanksgiving-I have other ideas for that so this is what I came up with. 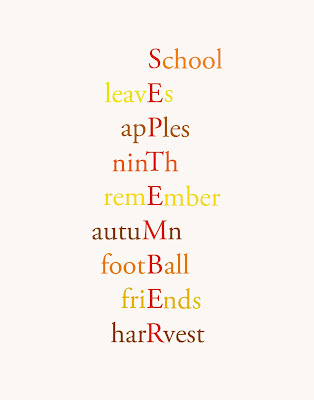 What do you think?

I hung it in the same place of my patriotic subway art.

As with my other word art let me know if you want a copy and I will email you one.
No comments: Links
Email ThisBlogThis!Share to TwitterShare to FacebookShare to Pinterest

Did you have a great weekend?  We did and loved the beautiful weather.  I'm sorry that most of the country has had crazy hot weather-the weather out here has been absolutely perfect.  The few days that we reached the high nineties afternoon storms rolled in and cooled it off-so nice.  I"m not bragging, just trying to remember how we felt this summer.
Labor day around these parts brings two things.
1. The Rib Cook Off-a good friend of ours said it is his favorite holiday. 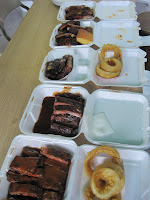 2. A Birthday for my baby.
He has been telling us about this birthday for several weeks-it's the first birthday that he understands more of what is going on, especially what presents mean.  I'll be showing you some of the presents I made for him, but for now I wanted to show you our new word art that we put up for the birthday.  It will be a tradition now to put it up for each birthday. 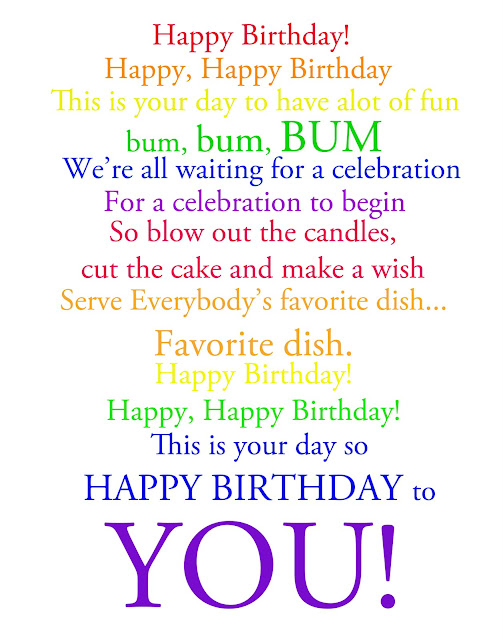 It's the song we sing instead of the traditional Happy Birthday tune.  It's upbeat and doesn't drag on.  I tried to find someone singing it online and couldn't-so I made my own recording...

If you would like the file of the word art let me know and I will email it to you.
1 comment: Links
Email ThisBlogThis!Share to TwitterShare to FacebookShare to Pinterest

Crafting With the Stars...Who Me?

I"m auditioning for
Crafting with the Stars

To see what project I decided to audition with check it out here... 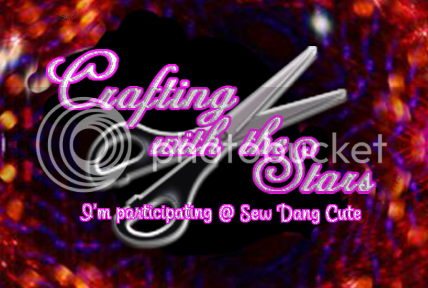 #37
No comments: Links
Email ThisBlogThis!Share to TwitterShare to FacebookShare to Pinterest 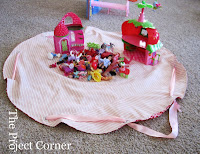 When I saw this on Pinterest I knew that it was a project I had to do.  Anyone else almost curse when you stepped on the sharpest smallest toy your child has?  We just got our first lego set, so we don't have enough to merit sewing a mat-but polly pockets and every little tiny winy thing they come with are all over my house.  So something had to be done. 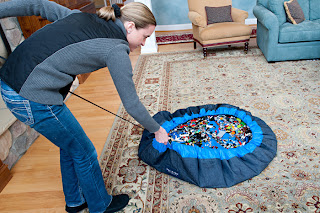 Using what I had on hand I made mine out of upholstery fabric. You may recognize the fabric from this project. 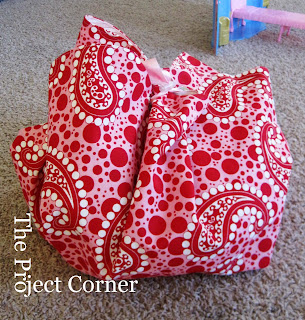 Here it is all cinched up.  I didn't have any elastic cording so I used 10 grommets around the edges and a pink ribbon. 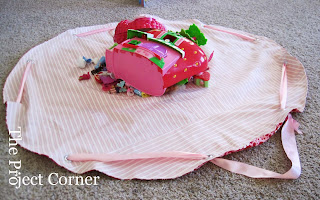 I was surprised how much we could fit into the bag.  Even the houses fit.  My little girl loved the idea that cleaning up would only take seconds. 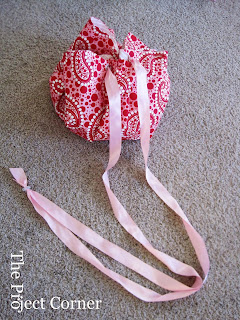 I will need to find the elastic cording so I won't have yards of ribbon hanging out when it is cinched up.  As soon as I finished it my little boy asked where his blue one was...I guess I will have to make a run to the fabric store.
2 comments: Links
Email ThisBlogThis!Share to TwitterShare to FacebookShare to Pinterest
Newer Posts Older Posts Home
Subscribe to: Posts (Atom)