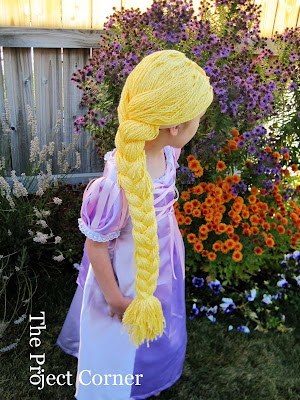 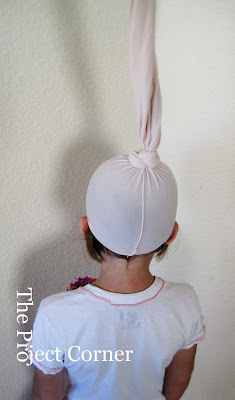 These were my daughters pair of tights from ballet earlier this year.
I put them on her head and tied a knot. 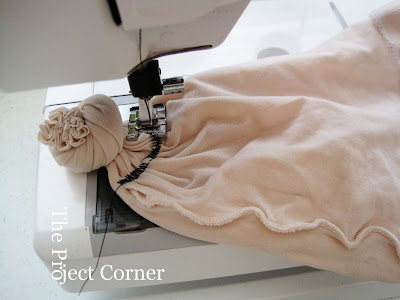 I moved the knot just a little so I could sew where the knot was. 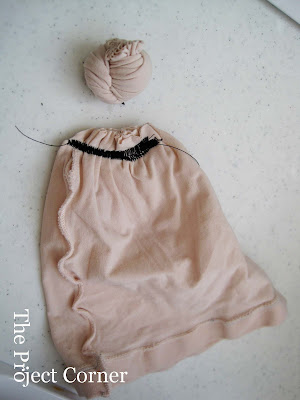 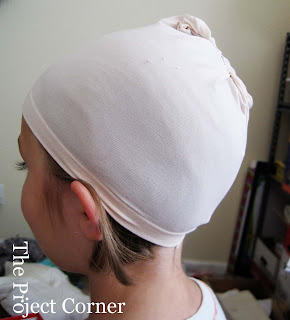 and had her try it on again.  Because there was going to be so much hair on the wig I wasn't too worried about it being smooth at the top. 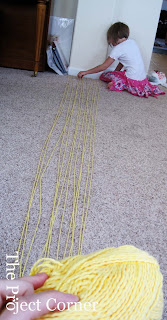 Next I found a spot in my house and had my little girl take the end of the yarn to that spot while I sat at the other spot and cut each strand. 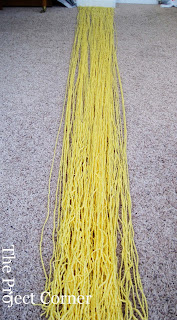 After two skeens of yarn it looked like this.  I found the middle and pulled it up. 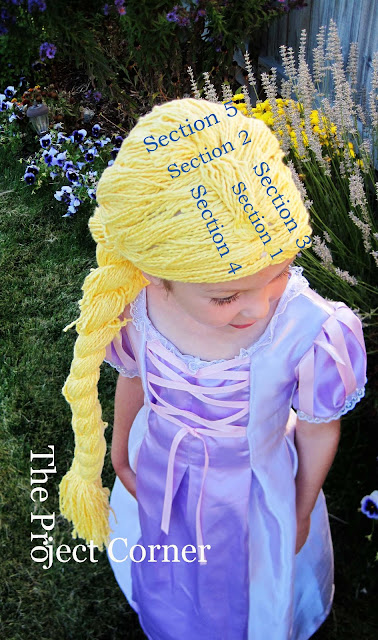 I was so involved in the next steps I didn't take any pictures.
Take the yarn and divide it into five sections.  Fold each section in half and sew that half on to the tights at the middle section.  First sew a section on the middle part to about the top of the head-then sew each section.  I first cut the hair way too long so the hair was really thin-I only had two sections. I had my girl try on the wig and cut it to an appropriate length-still long enough to look like Rapunzel but not too long to get stepped on or cut on everything.  I took the parts that I cut off and used those as sections 3,4 & 5.  Once all the sections were sewn on I had her try it on again and took my fingers through the hair to get the tangles out, then did a simple braid.  And there you have it-a simple inexpensive way to make a wig.
Email ThisBlogThis!Share to TwitterShare to FacebookShare to Pinterest

Wow, that turned out great! It looks amazing!

Ingenious! I love how you used a stocking as a base.

WOW this is amazing! My daughter would love this (she is a huge Rapunzel fan! Great job!
http://mommamadeit.blogspot.com/

I am just loving what you've done here. What an impressive head of hair. I bet all the little girls will be wanting one. I am a new follower from Too Cute Tuesday. Vicky from www.messforless.net

LOVE it! That turned out great!

Cute wig!! My girls would LOVE it if I made one (or two) for them! Thanks for sharing @'Sew Cute Tuesday'!

Oh my daughter would just flip for this wig!! Turned out awesome and so much better then the ratty wigs I have seen at the stores.
Thanks so much for linking up to Strictly Homemade Tuesday.